A kiss-cam shows that Love Has No labels 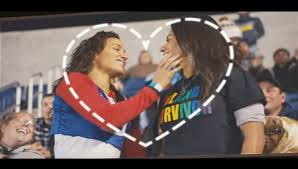 The Ad Council has partnered with both the NFL and creative agency R/GA to produce the latest offering from the "Love Has No Labels" campaign that features a “kiss-cam” highlighting diversity in couples and pairings.

"Love Has No Labels" is a movement to open our eyes to unconscious bias. While the vast majority of Americans consider themselves unprejudiced, many of us unintentionally make snap judgments about people based on what we see, whether it’s race, age, gender, religion, sexuality, or disability

It was released to coincide with Valentine’s Day this week and centers on the audience at the Orlando Pro Bowl football game in January.

The crowd then shows its appreciation in turn for an older African-American straight couple, a lesbian couple (one of whom is wearing an Orlando survivor t-shirt) as well as two young men with Down’s syndrome who hug each other warmly.

A charming video, watch it below: