Two gay men who fled Syria after living under ISIS have spoken at the U.N. 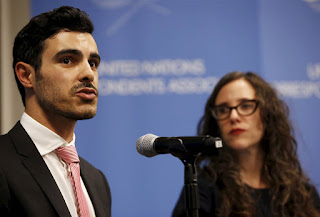 Subhi Nahas and Adnan have spoken at a historic meeting of the U.N. Security Council, which was the first of its kind to address LGBT issues.
The U.N. Security Council is holding its first ever meeting on gay rights to discuss the terrorist group Islamic State’s persecution of sexual minorities.
Responsibility was claimed by ISIS for the deaths of at least thirty men accused of homosexuality, the council heard.
Nahas addressed the meeting to say that those accused of homosexuality in his Syrian hometown, were thrown from rooftops, and that crowds cheered, including children.
The terrorist group, which operates predominantly across Syria and Iraq, is notorious for filming videos in which captives, usually Westerners or opposing fighters, are brutally slaughtered.