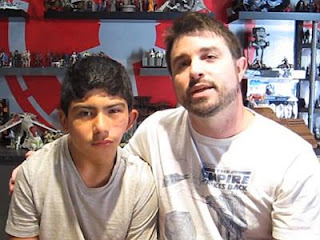 Daniel tells that his fathers provide him and his sister a wonderful life when no one else wanted to, and their family should be treated no differently than others. He also says to Chief Justice Roberts: "I know you have a tough decision to make with the gay marriage issue but my family is just as valuable and worthwhile as any other". And he adds: "We are all Americans and deserve an equal chance at bettering our lives."

Proposition 8 was a California ballot proposition and a state constitutional amendment passed in the November 2008 state elections. The measure added a new provision, Section 7.5 of the Declaration of Rights, to the  California Constitution, which provides that "only marriage between a man and a woman is valid or recognized in California".

The Supreme Court has to decide the constitutionality of state laws that define marriage as only the union of a man and a woman. On March 26-27, it will hear arguments on the California and federal laws, in two of the most anticipated cases of its current term.