President Obama was Sworn in for Second Term as US President

Barack Obama was sworn in for a second term as president of the United States today. With one hand on the bible of Abraham Lincoln and Martin Luther King, clamped by his wife Michelle, and in front of hundreds of thousands of people who had gathered to the Capitol since the early hours of the morning with temperatures near zero degrees, Obama has taken office for four more years.

After being sworn in, Obama delivered a moving speech in which he appealed for unity and equality of all Americans: "Now, more than ever, we need to move together as a people and a nation". Also, President Obama has invoked full equality for gay Americans: "Our journey is not complete until our gay brothers and sisters are treated like anyone else under the law". Probably, they have been two of the most important phrases of reelected president's speech. 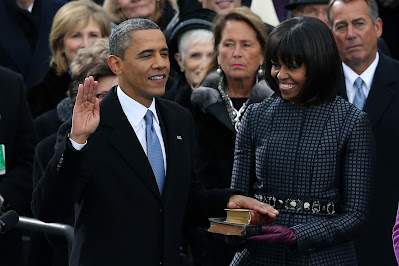