France, the 14th country where same-sex marriage is legal

This tuesday, the same-sex marriage law has been definitely approved in France.

The French parliament has passed, with 331 votes to 225, the final text that authorizes marriage equality and opens the possibility of homosexual couples to adopt. In addition to marriage and adoption, the text provides that gay couples already married in countries where same-sex marriage is authorized, as Spain, can be legally recognized in France.

The law also adds a new provision to combat discrimination by prohibiting any action or dismissal sanction against an employee who refuses, because of their sexual orientation, to emigrate to a country where homosexuality was repressed.

The French government hopes to end the important social debate of last months, which caused a big movement of opposition that has surprised by its breadth and radicalization. Supporters and opponents have gathered again in different places of Paris to celebrate or protest for this law.

In any  case, France becomes the 9th European country, and 14th in the world, to allow gay marriages, after the recent approvals of Uruguay and New Zealand. 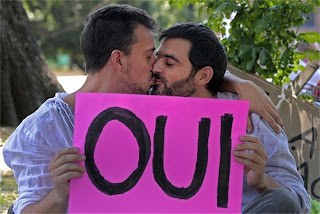