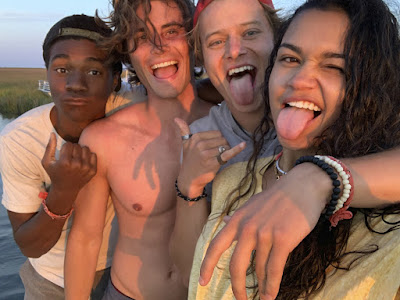 Outer Banks is a recent Netflix series about a group of teenagers from the wrong side of the tracks stumble upon a treasure map that unearths a long buried secret. Male stars are Chase Stokes, Rudy Pankow, Jonathan Daviss and Austin North.

The series was originally set in North Carolina, but it was finally shot in South Carolina in protest of HB-142, a N.C. state law preventing cities from passing laws that protect trans folks' access to public accommodations. The controversial "bathroom bill" held that people could only use bathrooms in government buildings corresponding with the sex listed on their birth certificates.

Jonas Pate, the creator of series, told he wrote his coming-of-age tale with Wilmington in mind, but Netflix decided not to film in the state due to HB-142. Pate finally chose Charleston to scout locations.

As far as protections in South Carolina go, Charleston became the first municipality in the state to adopt an ordinance that would stiffen penalties for offenses deemed hate crimes. Charleston also has a law protecting access to public accommodations on the basis of gender identity.

In any case, Outer Banks' over-the-top melodrama is balanced out by a strong sense of adventure that's bound to hook those looking to capture that summer feeling.

Enjoy the official trailer and cast below: