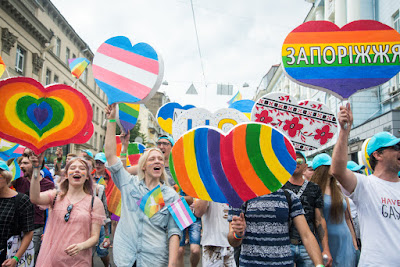 A Ukrainian LGBT group has sued one of the country's most prominent religious figures over comments blaming the spread of the coronavirus on same-sex marriage.

Kiev-based group Insight said it took legal action against Patriarch Filaret, who heads one of Ukraine's largest Orthodox congregations, over remarks made during a TV interview that rights activists said risked fuelling hatred and discrimination.

Since the first cases of COVID-19 were identified in China in December 2019, several religious figures across the world have suggested the emergence of the virus was divine retribution for same-sex activity, which they see as sinful.

Filaret added his voice in March, telling Ukrainian national TV network Channel 4 that the epidemic was "God's punishment for the sins of men, the sinfulness of humanity. First of all, I mean same-sex marriage," said Filaret.

"Such statements... are very harmful because they could lead to increased attacks, aggression, discrimination and acceptance of violence against certain groups," said Maria Guryeva, a spokeswoman for Amnesty International Ukraine.

The administrative proceeding filed in a Kiev court sought to obtain an apology for disseminating false information and a rectification from the Patriarch and the TV channel that aired the interview, said Shevchenko of Insight. "We just want them to be more responsible the next time," she said.

While the government has increased support for LGBT rights in recent years, same-sex unions are not legally recognised in Ukraine and activists say homophobia remains widespread.