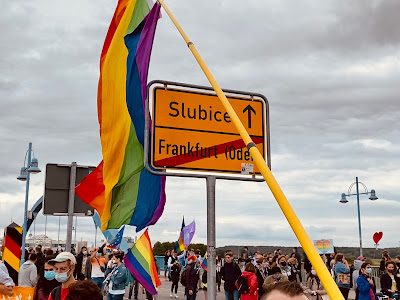 An LGBT rights protest at the Poland-Germany border has shone a light on the growing disparity between the two nations on queer issues.

Over 2,000 demonstrators stood up to homophobia with a protest held jointly by activists in the closely-connected border towns of Slubice, in Poland, and Frankfurt an der Oder, in Germany, which are separated by a symbolic bridge across the River Oder.

German protesters carried signs and banners expressing their love for their LGBT Polish neighbours, as the groups marched across the border.

LGBT people are a popular punching bag for Poland’s conservative government, with right-wing president Andrzej Duda narrowly winning re-election in July after making homophobia one of the core planks of his campaign.

As part of the politically-driven attack on LGBT people, nearly 100 Polish municipal or local governments have proclaimed themselves zones “free from LGBT ideology” and opposing gay “propaganda”, covering nearly a third of the country.

The European Parliament passed a resolution that strongly condemned the concept of LGBT-free zones, noting that they are “part of a broader context of attacks against the LGBT community in Poland, which include growing hate speech by public and elected officials and public media, as well as attacks and bans on Pride marches”.