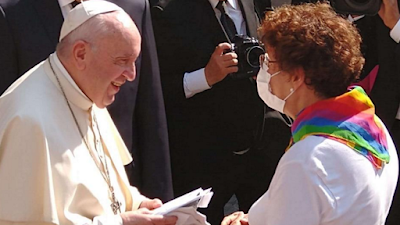 He did so in a brief encounter with some 40 Italian parents of LGBT children after the public audience in the Renaissance courtyard of San Damaso in the Vatican.

The parents are members of an Italian association founded in 2018, Tenda di Gionata, which welcomes and provides information and formation to LGBT Christians, their families and pastoral workers.

Mara Grassi, the vice president of the association, told Pope Francis: “We wish to create a bridge to the church so that the church too can change its way of looking at our children, no longer excluding them but fully welcoming them.”

Having listened carefully to what she said, Pope Francis reassured her: “The church does not exclude them because she loves them deeply.”

In 2013, Pope Francis said who am I to judge if someone is gay? during a flight with journalists. And in 2016, Pope Francis called for the Catholic Church to be more welcoming to LGBT people.