Gay couple got engaged at an NBA game 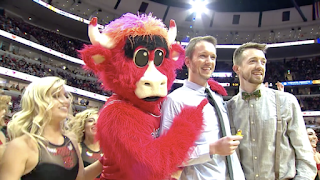 A gay couple got engaged in front of an NBA match crowd after the Chicago Bulls helped to stage a surprise proposal.

Jake Conrad enlisted the help of the team mascot, Bennie the Bull, and a troop of cheerleaders before popping the question during halftime.

The couple embraced as they were congratulated by the stadium announcer.

While marriage proposals are regular occurrences at sporting events and concerts, this is the first one about that involved a same-sex couple at an NBA game.