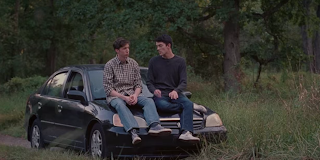 Camera film company Kodak has produced a beautiful and powerful short film on the theme of love and acceptance.

In the three-minute movie, which features little speaking, a young girl walks in on her older brother kissing another boy.

How will the boy’s father deal with the news of his son's sexuality? The troubled teen clearly fears his father’s reaction. A birthday gift he receives from his dad makes the feelings clear.

Watch the stunning video below: