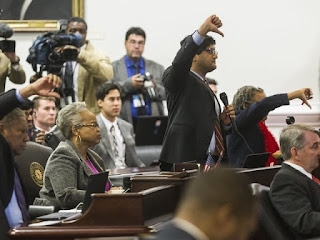 Gov. Pat McCrory had called the special session for lawmakers to vote on a repeal, but the Senate rejected the repeal measure by a vote of 32-16, and the House adjourned without taking a vote. Both chambers have a Republican majority.

This leaves in place HB2, which among other provisions prevents cities from enacting or enforcing LGBT-inclusive nondiscrimination ordinances and prevents transgender people from using the restrooms, locker rooms, and other single-sex facilities that correspond with their gender identity.

LGBT-supportive organizations immediately condemned this action. “Tonight, self-interested North Carolina politicians showed that they will stop at nothing as they resigned themselves to an even worse reputation and an economy that’s continuing to plummet”, said a statement issued by Rea Carey, executive director of the National LGBTQ Task Force Action Fund. “If nothing else, these lawmakers not only need to repeal HB2 but also pass comprehensive nondiscrimination protections for LGBTQ people. If they do nothing, HB2 will go down in history as one of the most vindictive and damaging laws in the state’s recent history”, she added.