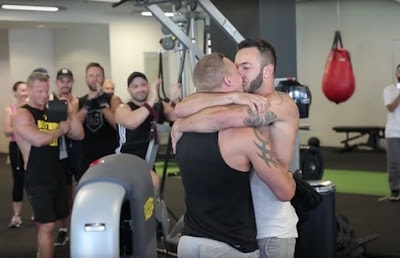 Aussies Nico Martina and Mikey Sinclair met one another at the gym, and so when Nico decided that the time had come to pop the question, there was only place to do it.

With the help of some dancers to draw Mikey’s attention, Nico then drops to one knee to pop the question.

Talking about the proposal, Nico said: "Mikey and I met each other exactly one year ago on the day I proposed at Fitness First Gym, Kings Cross, Sydney".

"This proposal was also a way to send a message that “love is love” no matter what your sexuality is. That’s why I chose two Beyoncé songs Love on Top and End of Time to dance to", he added.

Australia may not have marriage equality yet but that doesn’t stop gay couples pledging to get wed.