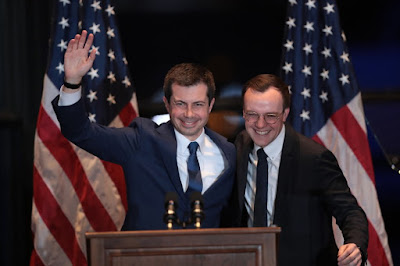 Pete Buttigieg, the first openly gay major presidential candidate, said he was dropping out of the Democratic race, following a crushing loss in the South Carolina primary where his poor performance with black Democrats signaled an inability to build a broad coalition of voters.

The decision comes just 48 hours before the biggest voting day of the primary, Super Tuesday, when 15 states and territories will allot about one-third of the delegates over all. The results were widely expected to show him far behind Joseph R. Biden Jr. and Senator Bernie Sanders.

Buttigieg canceled plans for a Sunday night rally in Dallas and a Monday morning fund-raiser in Austin, Tex., to return to South Bend. “Sometimes the longest way around really is the shortest way home,’’ he told supporters to loud cheers.

“The truth is that the path has narrowed to a close, for our candidacy if not for our cause,” he said, adding “Tonight I am making the difficult decision to suspend my campaign for the presidency.”

On a conference call with campaign donors on Sunday evening, Buttigieg said he had reached the decision with regret but concluded it was “the right thing to do, when we looked at the math,” according to one person on the call. Without mentioning opponents by name, Buttigieg said he was concerned about the impact he would have on the race by staying in, saying Democrats needed to field “the right kind of nominee” against Mr. Trump.

Buttigieg has never held statewide or national office but made a strong run in the Democratic primary, winning the Iowa caucuses narrowly from Bernie Sanders, now the national frontrunner, to whom he placed second in New Hampshire. He has really made history, and this is only the beginning of a great political career.

I donot say goodbye Pete, I say... see you soon!