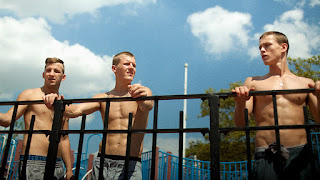 Frankie escapes the bleakness of his home life by causing trouble with his delinquent friends and flirting with older men online. When his chatting and webcamming intensify, he finally starts hooking up with guys at a nearby cruising beach while simultaneously entering into a cautious relationship with a young woman, Simone, played by Madeline Weinstein.

Even when the plot gets contrived, the emotions stay true. At 19, Frankie can't understand his own emotions, much less articulate them to himself or his family. His father (Neal Huff) is dying of cancer. And his mother (Kate Hodge) and younger sister (Nicole Flyus) are hardly sexual confidantes. And Dickinson digs so deep into the tension between repression and coming out that you're with him every step of the way.