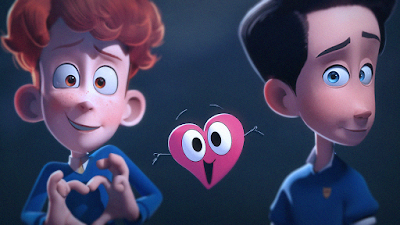 In a Heartbeat tells the story of a shy, middle school boy who struggles coming to terms with being gay, Sherwin, and the most popular boy in school, Jonathan. When their paths cross one day, Sherwin must chase after his own heart to stop it from revealing his true feelings to Jonathan, and the entire student body.

The film was crowdfunded via Kickstarter, with it reaching 5 times its original goal. The video has now reached near 16 million views, and people have been begging for an actual feature-length movie or a sequel.

Who’s behind it? The two filmmakers are Beth David, 21, from Cincinnati, Ohio and Esteban Bravo, 24, from Mexico City who met at the Ringling College of Design and Art in Florida. Both graduated this year and It was their first film collaboration and they wrote and directed the sweet story together.

The short film, which has no dialogues and a moving musical score, begins with Sherwin trying desperately to calm his beating heart as Jonathan, the boy of his dreams, walks past him. Find out what happens next by watching the heartwarming short film below: