Pope Francis: Who am I to judge if Someone is Gay? 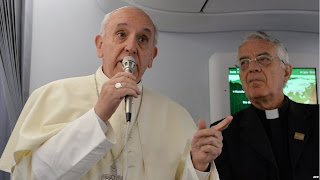 Surprising statements of Pope Francis, on the plane back to the Vatican, after his recent trip to Brazil.
Answering a journalist's question about a gay lobby within the Vatican, he said: "They say they exist. If someone is gay, who searches for the Lord and has goodwill, who am I to judge?". An he added: "The Catechism of the Catholic Church explains this very well. It says they should not be marginalized because of this (orientation) but that they must be integrated into society".
"The problem is not having this orientation. We must be brothers. The problem is lobbying by this orientation, or lobbies of greedy people, political lobbies, Masonic lobbies, so many lobbies. This is the worse problem", he also said.
Is something changing in the Catholic Church or is it only his opinion?