Gay dad writes a picture book inspired in his own experience 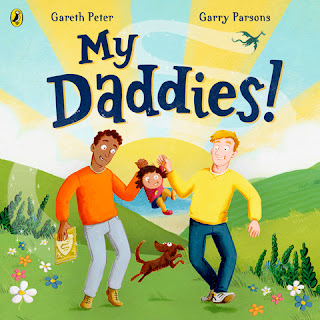 My Daddies, wrote by Gareth Peter, is the first picture book of its kind to be written and illustrated by same-sex adoptive parents. Gareth said he was inspired to write his debut work after noticing a lack of books on the topic.

Join a book-loving family, two gay dads and their adopted daughter, as they go on a roller-coaster-ride of story-themed adventures in this moving, magical, one-of-a-kind picture book, illustratated by Garry Parsons.

A funny and heartfelt picture-book, perfect for introducing children to the different kinds of family there are in the world today, and celebrating story time together.

Set off on a series of incredible adventures with an adorable family as the stories they read burst into colourful life. Battle dragons, dodge deadly dinosaurs, zoom to the moon and explore the world in a hot air balloon, before winding down in a wonderfully cosy bedtime ending.

Gareth Peter is an author and stay-at-home dad, living in Nottingham with his partner, two huskies and their two adopted children. It was the arrival of his own children that inspired Gareth to begin writing picture books.

Meet Gareth in the next video: