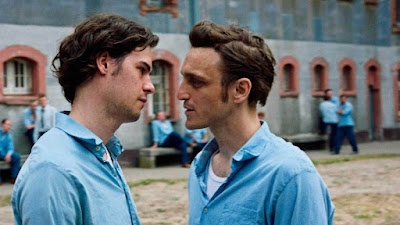 Great Freedom (‘Große Freiheit’, 2021), directed by Sebastian Meise, is a potent drama and love story which tells a story of resilience amid harsh treatment of gay men in post-war Germany.

In Germany after WW2, the liberation by the Allies did not mean freedom for everyone. Hans (Franz Rogowski) has been found guilty of something the government deems a crime: he is gay.

Under the 19th-century German penal code known as Paragraph 175, which formed part of Germany's criminal code until 1994, homosexuality is grounds for imprisonment, and Hans, over the course of multiple decades, is spied on and imprisoned again and again for being homosexual.

As he returns to prison, again and again, Hans develops an ever-closer relationship with his cellmate Viktor (Georg Friedrich), a convicted murderer serving a life sentence.

As their charged rapport blossoms over time into something far more tender, the movie explores love, lost time, and the tenacity of the human spirit.