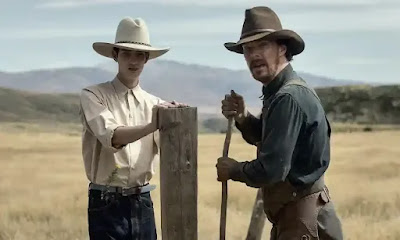 Jane Campion's The Power of the Dog, tells Phil's history, played by Benedict Cumberbatch, a man covered head-to-toe in dirt for most of the film, he embodies a character in a masculine crisis. He has a constant need to prove he's the roughest, toughest leader in a wolf pack of cowboys, possibly to hide his adoration and affection for the long-gone man who taught him more than just how to ride a horse.

The movie earned 12 Academy Award nominations. If it ends up winning big at the Oscars, it’ll be a seismic moment for queer cinema. LGBTQ themed films have won big before, but if Campion’s film sweeps the board in the way Oscars-watchers are anticipating, it would send a strong message to Hollywood that audiences are interested in queer stories.

Of course, the film’s success does raise some questions about some of the tropes Hollywood keeps falling back on. Once again, Cumberbatch and his co-star Kodi Smit-McPhee are nominated for playing gay characters when neither is knowingly or openly queer themselves.