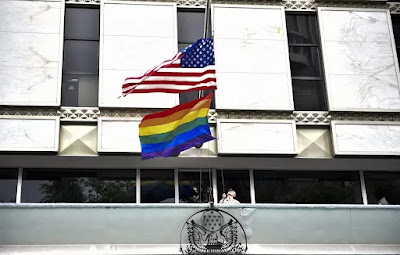 House Republicans (R) have introduced legislation prohibiting rainbow Pride flags from being flown outside U.S. embassies in other countries.

Republicans in Congress introduced the so-called “Old Glory Only Act” in response to a State Department official putting a rainbow flag up over a South American embassy, according to Rep. Jeff Duncan (R-Sout Caroline), one of the act’s co-sponsors.

The proposed law would only allow U.S. and military flags flown at embassies and diplomatic facilities. The law follows embassies flying the Black Lives Matter (BLM) banner and Pride flags in previous years.

The bill is supported by anti-LGBTQ+ Reps. Marjorie Taylor Greene (R-Georgia), Matt Gaetz (R-Florida), Louie Gohmert (R-Texas), and other Republican Congress members. Duncan did not comment on his home state’s capitol flying the Confederate flag, a racist emblem, at its Capitol.

President Joe Biden reversed Trump’s ban on rainbow flags at embassies. Biden’s Secretary of State Antony Blinken told American embassies and diplomatic missions that they can fly the Pride flag again as well as “other symbols connoting support for LGBTQ rights based on what is appropriate in light of local conditions.” 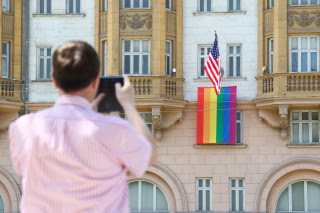 Republicans does not like the rainbow flag as Russian President Putin