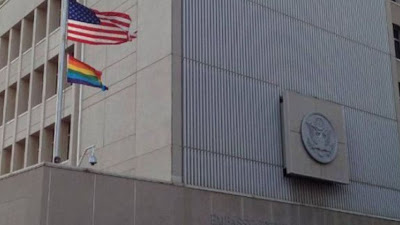 US embassies around the world have been denied the right to fly rainbow flags throughout June in honour of LGBT Pride Month.

This is a shift from the Obama era policy which gave diplomats blanket permission to fly the Pride flag during the month of June.

However, several American embassies and diplomats are defying the policy and the spirit of the Trump administration’s reported prohibition against flying rainbow colors from embassie. They are simply ignoring the State Department position, while others are using more creative techniques to boldly display their support for the LGBT community.

US missions in Seoul as well as in Chennai, India, Santiago, Chile, and Vienna all appear to be flying the flag. U.S, officials in Chennai also posted next video of the flag raising and a supportive Pride message.