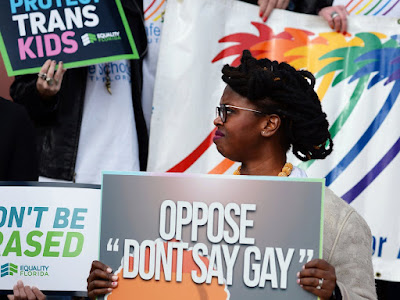 Florida, with Republican Gov. Ron DeSantis, has attracted considerable attention for its “Don't Say Gay” law. It’s not a new legislative notion, these gag laws have swept across the U.S., with similar legislation is appearing in at least a dozen other states. Each bill has its own particular language, let’s see how several states are approaching this issue.

In Alabama, with Republican Gov. Kay Ivey, has a bathroom bill dealling with opposite genders wanting to use opposite bathrooms. It was amended to include language declaring that anyone teaching in grades K-5 shall not engage in classroom discussion or provide classroom instruction regarding sexual orientation or gender identity that is not age appropriate or developmentally appropriate. In this law, "engage" is a problem word, suggesting that even if students bring the topics up, teachers should refuse to continue the discussion.

In Georgia, with Republican Gov. Brian P. Kemp, was promoted a bill forbiding schools to promote, compel or encourage classroom of sexual orientation or gender identity in primary grade levels, the bill sought to extend these prohibitions to any private or non-public schools that receive state money.

In Indiana, Kentucky, Missouri and Oklahoma the bills include a similar clause: "A student enrolled at a state educational institution shall not be required to engage in any form of mandatory gender or sexual diversity training or counseling".

In Iowa, with Republican Gov. Kim Reynolds, the bill bans any instruction relating to gender identity from kindergarten classes. In grades 1 through 6, such instruction may only be provided with parental consent. Iowa defines gender identity as a gender-related identity of a person, regardless of the person’s assigned sex at birth.

In Ohio, with Republican Gov. Mike DeWine, the bill prohibits any curriculum or instructional materials on sexual orientation or gender identity. It goes further by also prohibiting any such instruction for grades 4-12 that is not age-appropriate or developmentally appropriate.

In South Carolina, with Republican Gov. Henry McMaster, the bill prohibits requiring an individual to affirm, accept, adopt, or adhere to concepts including the existence of genders other than male and female, gender fluidity, nonbinary pronouns, and that race and sex are social constructs. It also says that state-funded entities may not.

And Tennessee's bill, with Republican Gov. Bill Lee, declares no public or charter school in state will not be allowed to use textbooks or instructional materials that promote, normalize, support, or address lesbian, gay, bi-sexual, or transgender (LGBT) issues or lifestyle.

Biden’s Administration issued a strong statement against these legislations. Remember all of you decide with your vote. 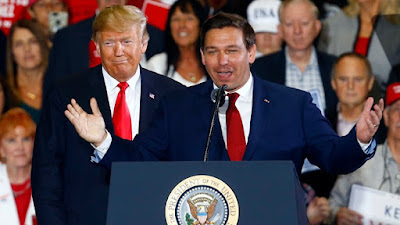 Florida Gov. DeSantis is one of the Republican
governors who supports these legislations