How would you react on gay adoption? 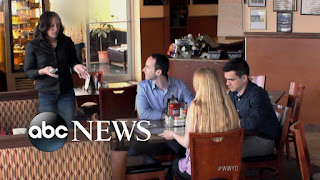 What would you do if you saw a pregnant woman harassed for giving her baby to a same-sex couple?
ABC hidden camera show "What Would You Do?" opted to explore people’s reactions to homophobia by rigging a fake confrontation in a cafe.
The stunt featured a number of actors, as pregnant woman Micheala meets two prospective adopters, David and Dan, in a diner in New Jersey.

The three are heckled by fake obnoxious onlooker Traci, in a bid to get responses from the real diners.