Gay couples in Mexico can marry... and adopt now! 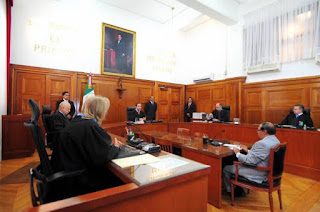 Mexico’s Supreme Court has ruled that banning same-sex couples from adopting children is unconstitutional.
Justices struck down a gay adoption ban in the southern state of Campeche by nine votes to one. The challenge to the 2013 law was filed by the state human rights commission, who argued it violated constitutional rights to non-discrimination and form families.
Gay marriage and adoption are legal in most of the Catholic-majority country, but opposition is stiff in several far-flung states states.
Presiding judge Luis Maria Aguila said: "‘I see no problem for a child to be adopted in a society of co-existence, which has precisely this purpose. Are we going to prefer to have children in the street, which according to statistics exceed 100,000?"
In June, the Supreme Court found state laws that restricted marriage only to heterosexual couples were discriminatory, effectively legalizing gay marriage nationwide.
Bravo Mexico!