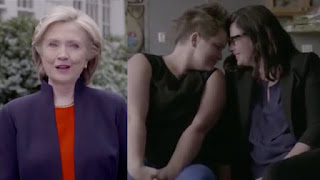 In a campaign ad posted to YouTube, Hillary Clinton reiterates the groundbreaking declaration she made in 2011 as Secretary of State that "gay rights are human rights", featuring images of several same-sex couples kissing.

The minute-long spot features several excerpts from Clinton's sweeping October speech to volunteers at the Human Rights Campaign, where the she laid out 10 promises to the LGBT community she would fulfill if elected president.

You can watch the video below.