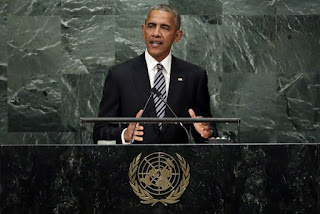 In his last speech to the United Nations, US President Barack Obama spoke out against violence aimed at gays and others around the world.

"I do not believe progress is possible if our desire to preserve our identities gives way to an impulse to dehumanize or dominate another group", Obama said.

"If our religion leads us to persecute those of another faith, if we jail or beat people who are gay, if our traditions lead us to prevent girls from going to school, if we discriminate on the basis of race or tribe or ethnicity, then the fragile bonds of civilization will fray".

And he added: "The world is too small, we are too packed together, for us to be able to resort to those old ways of thinking".

Obama is the first US president to publicly support same-sex marriage while still in office and has championed other areas of LGBT equality including allowing gays and lesbians to serve openly in the US military.

In his UN speech, Obama also pointed out that even in remote corners of the world: "citizens are demanding respect for the dignity of all people no matter their gender, or race, or religion, or disability, or sexual orientation".