The Labor Day is also the Day of LGBT Workers' Rights 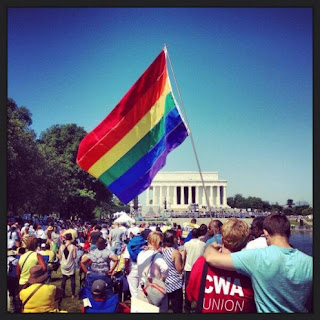 Labor Day is more than a way to mark the end of summer, or a three-day weekend to get in the last trip to the beach. Labor Day is a time of reflection, remembrance, and celebration of those people who have fought for workers' rights.

The history of workers' fight is also the history of LGBT labor. The common struggle of the LGBT community and the Labor Movement goes back to at least the 1930s, when the National Union of Marine Cooks and Stewards (NUMCS) elected a vice president, Stephen Blair, who was openly gay.

In 1948, Harry Hay, a longshoreman from the Bay Area in California, founded the Mattachine Society, one of the first gay rights organizations.

By the mid-1970s, the great Harvey Milk and the Teamsters banded together for the Coors beer boycotts and Harvey's successful bid for San Francisco Supervisor.

Labor and the LGBT community repeated this success when they worked together to defeat the Briggs Initiative, which sought to ban gay people from teaching in California public schools.

In more recent times, organized labor has called for the repeal of the Defense of Marriage Act and, to date, over 60 labor unions have endorsed the Employment Non-Discrimination Act to ban discrimination on the basis of sexual orientation and gender identity.

On this Labor Day, all of us must stand for LGBT workers' rights.