Russell Tovey plays a gay footballer in The Pass 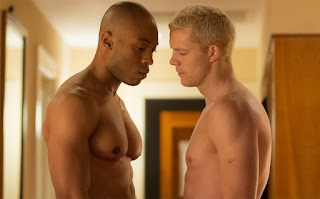 In Russell Tovey‘s new film The Pass, he plays a closeted footballer struggling to come to terms with who he really is, haunted by the night he kissed a teammate.

Adapted by John Donnelly from his own play, this directorial debut from Ben A. Williams provides a knockout showcase for Russell Tovey as Jason, an ambitious soccer player leading a life of denial at the expense of his former bond with plucky wannabe Ade (Arinze Kene).

Tovey and Kene play football players Jason and Ade, who when we first meet them are 19-year-old rising stars at the academy of a famous London football club.

Friends and teammates since they were eight years old, it's now the night before their first-ever game for the first team – a Champions League match – and they're in a hotel room in Romania. They should be sleeping, but they're over-excited. They fight, mock each other, prepare their kit, watch a teammate's sex tape. And then, out of nowhere, one of them kisses the other.

The impact of that one moment reverberates through the next decade of their lives, 10 years of fame and failure, secrets and lies, in a sporting world where image is everything.

The Pass opened the Flare London LGBT Film Festival and it will be screened at this year’s London BFI Film Festival.