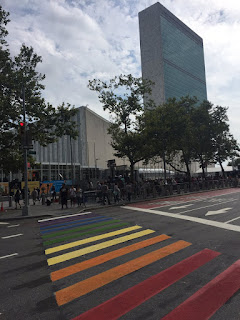 The 71st Regular Session of the United Nations General Assembly is currently holding at UN's Headquarters in New York City.

The LGBT core group of the UN unveiled a rainbow walkway named #Path2Equality outside of the general assembly building on 46th Street.

American Ambassador Samantha Power and Dutch Foreign Minister Bert Koenders, along with other members of the LGBT Core Group, OHCHR and Human Rights Watch, revealed the crosswalk, intended as a symbol of the UN’s continued progress toward promoting LGBT rights.

"A lot of world leaders, ministers, and even heads of state walk into the UN this way, and they will cross the crosswalk and hopefully many of them will know and will appreciate the spirit in which it has been laid down", Power said.