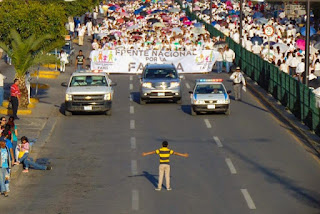 A photographer captured the incredible moment a 12-year-old boy tried to stop thousands of anti-gay protesters from marching against same-sex marriage in Mexico over the weekend.

“At first I thought the child was only playing”, the photographer said..

He asked him why he did it, and this was his answer: “I have an uncle who is gay”, the boy replied. “And I hate people that hate”.

Organised by the National Front for the Family, a coalition of conservative civil society organisations and religious groups, the marches against President Peña Nieto proposal change the country’s constitution to allow same-sex marriage nationally took place up and down the country, attracting an estimated 11,000 in Celaya.

Equal marriage is currently permitted in Mexico City as well as 10 of the country’s 31 states, including Coahuila, Quintana Roo, Jalisco, Nayarit, Chihuahua and Sonora.

In addition, Mexico’s supreme court said last year that laws restricting marriage to a man and woman were unconstitutional.

Is it time Mexico?