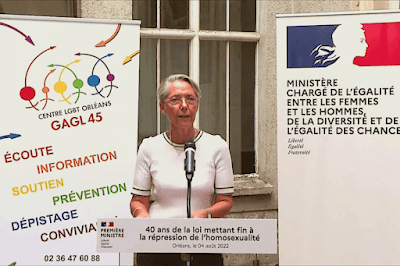 France’s Prime Minister, Elisabeth Borne, announced the new LGBTQ ambassador position on the 40th anniversary of the decriminalisation of homosexuality in the country.

Borne visited an LGBTQ centre in Orleans, where she unveiled plans for the new government position. The Prime Minister said the role of the ambassador is to “campaign for the decriminalisation everywhere of homosexuality and trans identity.”

There is full support for the creation of the role by President Emmanuel Macron and his government. The ambassador will be appointed by the end of the year.

She continued: “The President of the Republic’s approach, my approach, the government’s approach is not ambiguous: we will continue to fight to make progress on the rights of the LGBTQ.”