Kiss-a-thon in Colombia to support a gay couple 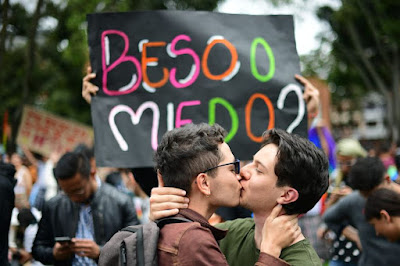 Hundreds of people took to a park in Colombia to show their support for a gay couple who were set upon after kissing in public.

Same-sex couples staged a kiss-a-thon ("besatón" in Spanish) in the park in Bogotá where the pair had been confronted by a group of women, one of whom was wielding a broomstick.

The protest was organised on social media after a video had been widely shared of two young gay men being forced from a park by angry locals.

In the video, women can be heard shouting at the couple, telling them that "in this neighbourhood we don't allow sex in the park, especially not in front of children". The young men ask "what sex?" and say that they had only kissed.

Holding signs reading "Kisses are signs of affection, not a crime", people gathered in the park in the Engativá neighbourhood of the capital. Waving rainbow flags, couples kissed and celebrated as music played.

Bogotá's mayor condemned the incident. Colombia legalised same-sex marriage in 2016 but homophobic attacks are not uncommon. 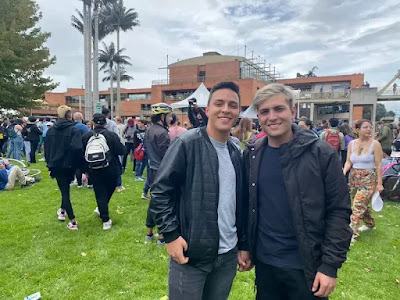 The attacked couple was also in the protest