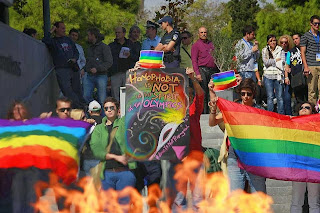 Dozens of Greek activists peacefully protested today against Russia's anti-gay laws, at the Olympic flame passage through central Athens, ahead of the handover of the Olympic flame to the Sochi 2014 Winter Olympics organisers.

The activists gathered on the Acropolis Museum's steps, raising rainbow flags and holding banners reading "Homophobia is not in the Spirit of the Olympics" and "Love is not Propaganda".

The activists declared in a statement: "Russia receives the Olympic flame, a globally recognized symbol of humanitarian ideals. Yet the laws in Russia are far from the ideals of human rights when it comes to lesbian, gay, bisexual, trans-gender, queer people, who are tortured, abused and discriminated against. We choose not to be silent this day".

Recently, the IOC was satisfied because it's convinced that Russia will respect the Olympic charter and there will be no discrimination during 2014 Sochi Olympics.

But, after passing the law banning gay propaganda last June, the situation of LGBT people in Russia is becoming increasingly difficult and the homophobic climate has reached unacceptably levels. Critics confirm that law effectively bans all gay rights rallies and could be used to prosecute anyone voicing support for homosexuals. 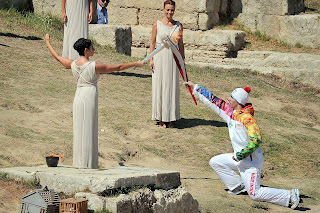 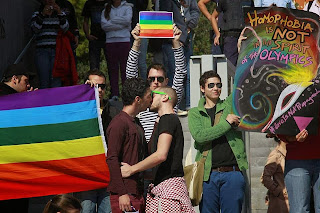 A moment of the activists protest in Athens