Vlogger kicked out of his school for being openly gay 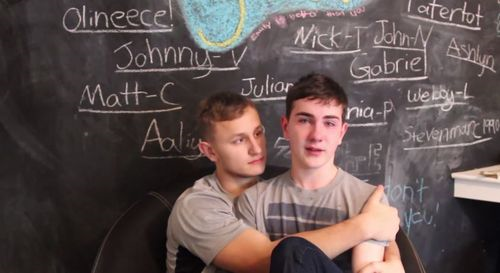 Austin Wallis, a 17-year-old YouTuber, has posted an emotional video online telling the story of how he was essentially kicked out of his private high school for being openly gay.
Austin, joined on camera by his boyfriend Nicolay, recounts being pulled into the principal's office after the administration found out he was gay. The school also notified Austin's parents and called his mother into the meeting.
"He basically told me...I had to go back in the closet, which means I had to delete all my social media including YouTube. I had to erase my digital impact on the world. And he said I would have to do that to stay at the school and I could never be involved in another video or do anything for that matter..."
After two days, Austin decided to leave the school rather than stay in an environment that wasn't welcoming.
Austin says that the principal told him his YouTube channel was having a "bad impact" on the school. Austin, however, has made the decision not to reveal the school's name because he says there are faculty members who support him and doesn't want the video to reflect badly on them.
He hopes the video can raise awareness for situations like his and will be a call to action for change.