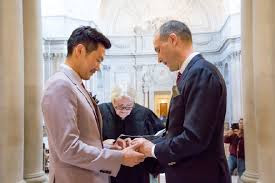 Hanscom Smith, a senior diplomat and the US Consul General in Shanghai, married his Chinese male partner Lyu Yingzong during his holiday leave in San Francisco, California. The American west coast city is considered a fairly important place in supporting LGBT movement.

Mr Smith previously served in the Office of Japanese Affairs at the Department of State and as the team leader at the United States Provincial Reconstruction Team in Muthanna Province, Iraq. He was also a diplomat serving in the US embassies in Yaounde, Cameroon, Copenhagen, Denmark, Phnom Penh, Cambodia, Bangkok, Thailand, Kabul, Afghanistan and Beijing, China.

Check the publicly gay US ambassadors in the world.