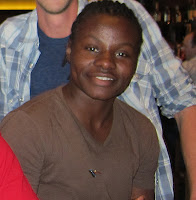 A transgender man from Uganda has been granted refugee status in Canada, after saying he feared for his safety to return to his home country, where homosexuality is illegal.

Adebayo Katiiti was participating in a gay pride event when it was raided by Ugandan police. The transgender man, who was a judge at the event, described police beating and inappropriately touching the people in attendance.

Katiiti attended the International Gay and Lesbian Aquatics Championships in Edmonton (Canada) and he took part in a panel where LGBTQ swimmers from around the world shared stories of the discrimination, brutality and hate they faced simply for being who they are.

The swimmer said he made the decision the morning he was supposed to leave for Uganda, but visa was valid until January. After a hearing with a judge, Katiiti has finally received refugee status.

Katiiti said he has found support through the Edmonton Mennonite Centre for Newcomers and the St. Paul’s United Church community. He believes he is lucky, knowing how many people are in hiding in Uganda, fearing for their lives because of their gender or sexual orientation.