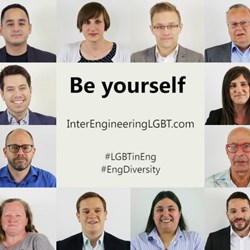 A new video highlights what it’s like to be an LGBT engineer. Published by InterEngineering, the video hopes to give positive role models for aspiring young LGBT engineers.

Mark McBride-Wright, chair and co-founder of InterEngineering believes there is a lot of work to do. He declared: "Engineering does suffer from the stereotype of the predominantly male workforce which it contains, and with this it can mean it is difficult to be open in the workplace". And he added: "I have always found that by being open and bringing your whole self to work gives you the capacity for creativity and to dedicate your whole-self to your job."

The homophobic attitudes in engineering industry can be transformed through proactive, educational teamwork and leadership.