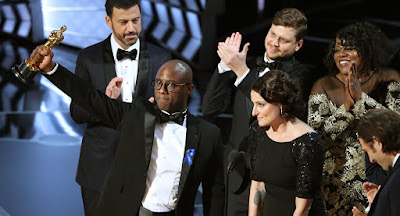 In what is set to become arguably the most memorable moment in an Academy Awards ceremony ever, gay-themed Moonlight won the Oscar for Best Picture, shortly after the award had mistakenly been given to La La Land. It is the first LGBT film to win this prize.

On the 50th anniversary of Bonnie and Clyde, actors Warren Beatty and Faye Dunaway were the presenters for the show’s last award. In what the audience thought was Beatty trying to be funny after he opened the award, he checked the envelope twice and hesitated for a while before announcing La La Land as the winner.

During the producer’s acceptance speech a stage hand ran onto the stage to check the envelopes. La La Land producer Jordan Horowitz then announced Moonlight had won the Oscar and invited them onto the stage.

It took a while for the confusion to settle down before the Moonlight team, who could not believe they had won, stepped on stage.

Host Jimmy Kimmel stepped in to confirm the mix-up and Beatty soon followed to explain what had happened. ‘I want to tell you what happened,’ he said. ‘I opened the envelope and it said Emma Stone, La La Land. That’s why I took such a long look at Faye and at you. I wasn’t trying to be funny.’

Moonlight has been praised by critics and LGBT people alike for its “exploration of gay black masculinity… managing to do so without ever diminishing the lives full of complex humanity that black gay men still manage to have in America while navigating that reality”.

Watch what happened below: