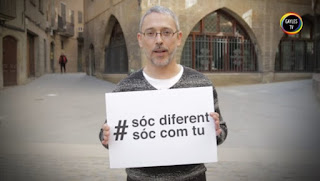 LGBT people in Osona county, a rural area in Catalonia (Spain), featured a new campaing with the slogan "I am different, I am like you", which vindicates the rights of LGBT community in rural areas.

This campaign is based on an original idea by Gender and LGBT Lab and produced by Gayles.tv, and its goal is to give visibility to the reality of LGBT people living in rural places.

The life for them in villages and small towns is remarkably different than living in big cities and metropolitan areas: the lack of referents and meeting points, the different forms of homophobia, or the need to move to a big city for being able to live according to the gender identity or sexual orientation, all of them are issues suffered by LGBT people in rural areas, issues do not usually happen in big cities.

On the video of the campaing you can hear phrases like "I am not weird", "I believe in the potential of diversity", "I am not your joke" or "love or desire should never be a reason to exile".

This campaing is filmed in a European country but it could work in similar rural areas around the world. Although, sadly, in too much countries they live much worse.

There is still a lot of work to do!