Most Americans are against legislating which bathrooms transgender people can use 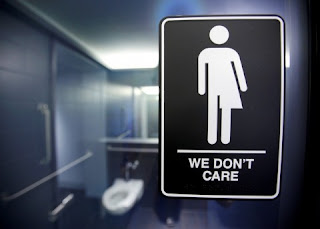 At least the majority of Americans seem to be thinking clearly: a new poll reveals 53% of those asked do not support laws that ould require trans people to use the bathroom of the sex assigned them at birth rather than their current gender identity.

The chart isn't quite as jolly as it may seem. Aside from 53% not being a very large majority, 39% of Americans said they support the passing of such legislation. Notably, nearly one in ten (8%) Americans report no opinion on this issue.

Naturally, the results are different across party lines, with 59% of Republicans supporting such laws and 65% of Democrats opposing, however 30% of Democrats still support the legislation.

There is broad public support for laws protecting gay, lesbian, bisexual and transgender people against discrimination in jobs, public accommodations and housing. Seven in ten (70%) Americans favor laws that would provide these protections to LGBT people, compared to roughly one-quarter (26%) who oppose such laws.

There is still a lot of work to do on LGBT rights. 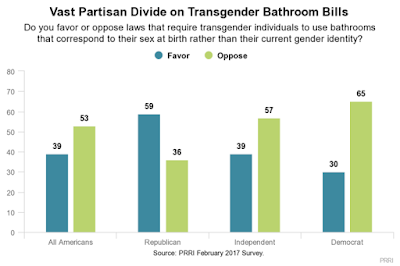