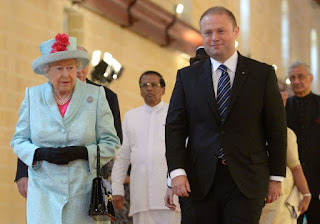 Malta’s PM Joseph Muscat was speaking at the Service of Celebration for Commonwealth Day at Westminster Abbey, attended by the Queen and a number of other world leaders.

In his address, Mr Muscat, currently the Chair-in-Office of the Commonwealth, alluded to the high number of Commonwealth countries that continue to enforce penal codes that were introduced under the British Empire and never repealed. In total 40 out of the 53 Commonwealth member states still criminalise homosexuality, from India to Barbados, Sri Lanka to Tonga.

Speaking about the need for tolerance, Mr Muscat said: “I want to single out the respect for LGBTIQ persons, the lack of it. The remarkable number of our countries with anti-LGBT laws is, arguably, a considerable blot on our family of nations’ standing".

“I had conversations and am aware that there are leaders who know that things must change, but are wary of how society will react to their first move. To them, I said and I say, that the Commonwealth will be with them to help make their first steps. History, I am sure, will judge them positively when they do so”.

Check the situation of LGBT rights in the Coommonwealth here.

Many Commonwealth members still criminalize homosexuality
By the way, where are the women?