Legislative reform could be approved in Arkansas against transgender people 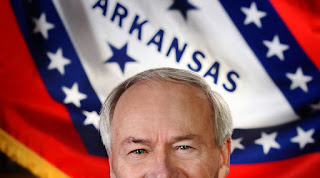 Trans people in Arkansas could soon lead an essentially illegal life. State lawmakers are currently discussing three bills: House Bill 1986; House Bill 1894, and Senate Bill 774. If all three pass, it could force trans people out of a majority of public life because their existence would effectively be illegal.

SB774 is Arkansa’s version of North Carolina’s controversial HB2 ‘bathroom bill’. Called the Arkansas Physical Privacy and Safety Act, it would require trans people to use public bathrooms matching the gender marker on their birth certificate. It would apply to all government and other state-owned buildings. Governor Asa Hutchinson in the past said Arkansas did not need laws like North Carolina.

HB 1986 would expand existing Arkansas law and allow a person to press charges against trans people under indecent exposure laws. Indecent exposure, it argues, is any situation where someone knowingly exposes his or her sex organs to a person of the opposite biological sex: (A) In a public place or in public view; or (B) Under circumstances in which the person could reasonably believe the conduct is likely to cause affront or alarm. The law could, for example, ban trans men who had top surgery from going shirtless anywhere in public.

And the third bill, HB 1894, which was voted down by a committee in early March, but was reintroduced by Representative Mickey Gates. It would ban trans people from changing the gender marker on their birth certificate. Currently, trans people in Arkansas need a court order, as well as written confirmation from their doctor that they have completed gender-confirmation surgery to change their birth certificate.

The House and Senate have until 31 March to reach a decision, before the bills fail. If they do, they will be tabled for the year. 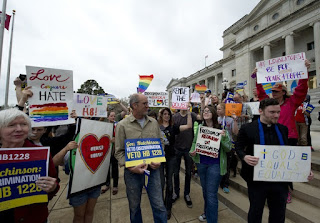