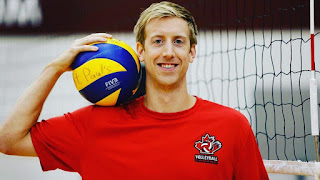 This article originally appeared on Outsports.

When meeting a new team, I am always careful when first talking with people about the subject of my own sexuality. I want to ensure they are comfortable and that I don’t come on too strong, too quickly.

Here in Rovaniemi, Finland, near the Arctic Circle, I found out that I was the first gay person that any of my Finnish teammates had ever met. I figured there weren’t many openly gay athletes, especially in the volleyball world, but I didn’t expect to be the first gay person ever that they would meet.

Despite not having much experience with gay people, the team didn’t take long to join along in joking about it with me. I find humor to be a good tool in getting people comfortable with anything. Now the jokes are frequent, which is a good sign for me, because it shows how far we’ve come in just a few short months.

I had an article come out in Finland about my experience losing a contract in another country for being gay and then signing here. Someone saw that article and reached out to me and asked me if I knew about Arctic Pride.

I hadn’t heard of it before that, but it turns out that Arctic Pride was happening in Rovaniemi, a city of 58,000 and the “official” home of Santa Claus. This was awesome news! I had never been to a Pride outside of Canada before and was really excited that we had the day off so I could join the parade this Saturday, March 4 at 12:30 p.m.

It was around this point that I approached our captain, coach and president of the club to see if they would be interested in joining in on the parade with me. I was surprised by their response, not because they said yes and were excited, but because they wanted to go all out. It was so awesome that they had as much excitement as me.

After that I asked the team about their interest level and everyone said they’d be more than happy to join. I was so honored that they are coming because I’m pretty sure if you asked any of the Finns before I arrived if they could ever see themselves walking in a Pride Parade, they would have said no. The fact that they are supportive of not only me, but also the community, means a lot.

Here we are with our banner: