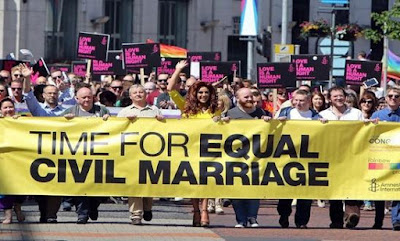 A bill to legalise same-sex marriage in Northern Ireland is set to increase pressure on Theresa May to act, amid the failure to restore power-sharing in Belfast.

A Conservative peer introduced the legislation in the House of Lords on Tuesday, ahead of an identical move by a Labour MP in the Commons a day later.

The move comes after the Government said it was willing to allow a free vote “on matters of conscience such as equal marriage” in Northern Ireland, despite the matter being devolved to Belfast.

It is almost 15 months since the collapse of the devolved admini,stration at Stormont, with little prospect of restoring it in the near future making it impossible for Northern Ireland to legislate.

The Love Equality campaign for equal marriage said its preference was for the Northern Ireland Assembly to act, pointing to “overwhelming support” from the public in the province.

Love Equality pointed out that, in November 2015, a majority of members of the Stormont Assembly voted to support equal marriage.

However, the measure was blocked by the Democratic Unionist Party (DUP) using a “Petition of Concern”, a mechanism to veto measures without sufficient cross-community support.