Get some Taipeilove* in your life 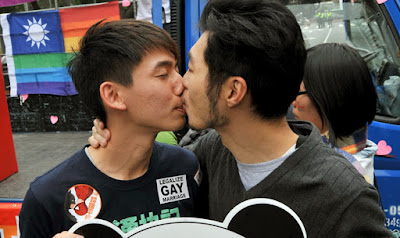 In May last year, Taiwan made history as the first country in Asia to give the green light to same-sex marriage.

Essentially, the Council of Grand Justices ruled that it was unconstitutional not to allow same-sex couples to marry. In its ruling it gave legislators a two year deadline to make a law allowing same-sex marriage to happen.

It’s been almost a year, but the country isn’t any closer to same-sex couples heading down the aisle.

Since May last year, religious groups have tried to start a petition to overturn the court’s ruling, Taipei hosted Asia’s biggest Pride parade ever, lawmakers continually found excuses not to make marriage equality law and a Taiwan court refused to recognize the marriage of a gay couple wedded overseas.

Taiwan’s longest-running marriage equality activist Chi Chia Wei sums it up pretty well: ‘You’re almost home yet you need to wait outside the door for the next year and a half’.

Thankfully one filmmaker has been there to capture Taiwan’s unbelievable path to marriage equality in a unique ‘passion project’.

Liu saw an opportunity to tell the world about the ‘huge step’ for an Asian country to approve same-sex marriage. She hopes Taipeilove* will have a positive impact on other Asian countries.