Queer Britain, the first LGBTQ+ museum in the UK 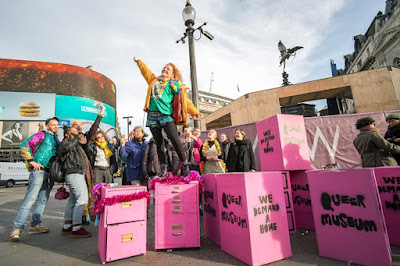 A campaign to create a new national museum, called Queer Britain, which would celebrate the richness and diversity of the nation’s LGBTQ+ inheritance, is being launched in London.

The National LGBTQ+ Museum will play host to a series of permanent and temporary exhibits, positioning itself as an essential resource for the community to preserve and celebrate the memory of figures, stories and issues of LGBTQ+ community.

“It is a necessary and long overdue resource,” said Joe Galliano, a former editor of Gay Times, and leader of the campaign. “We don’t underestimate the challenge, but artefacts and people’s stories are being lost every day and we need to save them. Already many of the people, inevitably mainly men, who directly experienced the situation before the partial decriminalisation of homosexuality in 1967, are no longer with us.”

Galliano added: “In literature, in sport, in art, in engineering, in science, there is no aspect of life in Britain in which LGBTQ people have not had an influence. It is time their stories were told and celebrated. It’s time we took up the challenge and told this story ourselves.”

The group has identified a potential site in Southwark, south London, for the museum and hope to see a building open there in 2021 serving also as a visitor attraction and social centre. Galliano, who has experience in corporate fundraising, acknowledged that the cost would be many millions, both to establish and run the centre.

Plans for Queer Britain: The National LGBTQ+ Museum were announced at an intimate reception in Hotel Café Royal, London, which has its own place in gay history, having been a favourite hangout of Oscar Wilde.