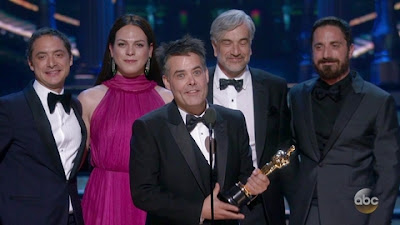 Chilean movie 'A Fantastic Woman' has won the Oscar for best foreign language film at the 90th Academy Awards.

Directed by Sebastián Lelio and written by Lelio and Gonzalo Maza, the film marks the first Chilean entry for the foreign language Oscar since Pablo Larraín’s No, and the first ever Academy award for Lelio.

A Fantastic Woman follows Marina, a transgender woman played by Daniela Vega, who is in a relationship with Orlando, a man 30 years her senior. When Orlando dies of an aneurysm, Marina becomes an object of suspicion for his family, who see and treat her as a rogue, and she must figure out how to work through her grief while external forces make things even more difficult.

In addition, Daniela Vega became the first openly transgender person to present an award at the Oscars.

The film's journey began last year at the Berlin International Film Festival, where the movie had its world premiere. The movie won a Silver Bear for best screenplay as well earning the Teddy Award for best LGBT film at the festival.