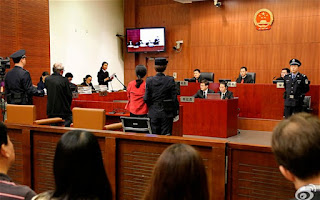 A popular Chinese novelist has been sentenced to 10 years in prison for writing and distributing homoerotic novels, provoking widespread debate online over the severity of her sentence.

The female writer, surnamed Liu, was found guilty on Oct. 31 by Wuhu county court in eastern Anhui province after she self-published a book was described by police as depicting "obscene sexual behavior between males" set to themes of "violence, abuse and humiliation."

The popularity of homoerotic fiction, dubbed "boys love," has soared in recent years in China, where a booming cottage industry of self-published authors churn out hundreds of new titles each month.

Though most titles only hint at homosexual relations and instead feature "bromances," others are more explicit, risking the ire of the country's censors.

Homosexuality was decriminalized in China in 1997, and was removed from the official list of mental illnesses a few years later. Activists and experts, however, have long argued that prejudices and discrimination, as well as periodic government crackdowns, persist.