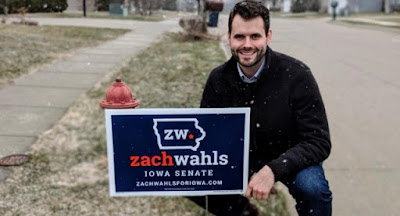 Zach Wahls, 27, who as a teenager campaigned for his lesbian mothers’ right to marry, has been elected to the Iowa State Senate.

Wahls, the Democratic Party candidate, won 78 percent of the vote, defeating libertarian Carl Krambeck, in Iowa’s Senate District 37 in the US midterm elections 2018, and he will be one of the youngest people to ever serve in the Iowa Senate.

“I hope tonight marks a fresh start for Iowa. We must all come together to bring real reform to our health care system, restore a tradition of excellence to our public education system and raise incomes for Iowa’s working families,” Wahls said.

The new Iowa State Senator-elect is the son of a lesbian couple, and he stood up for his mothers’ LGBT rights in a speech that went viral.

Wahls rose to prominence in 2011 when, aged 19, he stood before the Iowa House Judiciary Committee and urged Republicans to scrap their plans to push a constitutional amendment banning recognition of same-sex unions, which had been legalised in 2009.

“Our family really isn’t so different from any other Iowa family,” the young student said at the time.

Remember that moment in the next video: